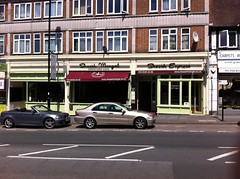 Turkish restaurant in Worcester Park. It's quite big, spread across two rooms.

bob visited on a Monday afternoon in June 2014. There were a couple of other customers already there when I arrived around 2pm, and a few more wandered in while I was there.

As I entered, I was asked if I wanted the lunch menu deal or the a la carte menu; I chose the lunch menu deal for £8. For my starter I went for hummous photo, which was pretty good. For my main, I asked for the lamb shawarma, but they'd run out so I had the lamb cop sheesh instead photo. This had a nice spicy marinade and was quite tender. The baklava to finish was very good photo.

A bottle of still water was £3.50, and they brought tap water when I finished that and was still eating.

Acessibility: A ramp to get in. Level inside to toilets, including an accessible one.