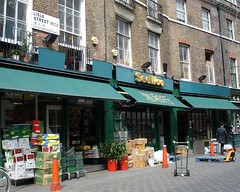 Chinese supermarket on Lisle Street in Chinatown. They also have a big cash-and-carry-style branch in North Greenwich.

They stock all the usual Chinese supermarket staples, including vegetables and frozen stuff. There's a small selection of Japanese food too.

They don't seem to have a fresh meat counter, but the freezers at the back have various meats and offal, including thinly-sliced meat and fish/meat balls for hotpot.

Accessibility: One step up to get in. The aisles are narrow and crowded, and some of the stock is down a flight of stairs.