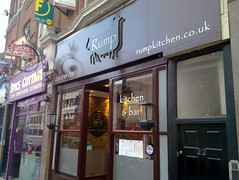 Now closed; was a steak restaurant and bar in Putney. As of April 2011, the Morning Advertiser reports that the site has been acquired by the Byron burger chain.

The menu is quite brief and is all about steaks and burgers — vegetarians have a "choice" of one starter (grilled halloumi) and one main (halloumi burger). We skipped starters and went straight for steaks, since we wanted to get back for another pint at the Bricklayers Arms which is just round the corner.