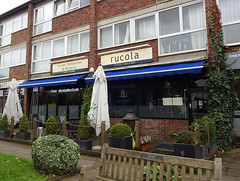 Italian restaurant near Chalfont and Latimer Station, part of a small chain.

It has two rooms, with the larger seating around 45-50. There's also a few tables on the heated (but not covered) decking area out the front. In the larger room, white linen tablecloths contrast with the matte black floor and gloss black chairs, and the cream-painted walls are covered with art prints and portraits of women. The smaller room, which also houses the bar, has curved banquette seating, upholstered in red pleather, for groups of four.

Kake has visited twice now, with almost exactly a decade between visits — most recently in October 2017.

On a Sunday evening visit in September 2007 in the company of Ewan, Jo, Sarah, and Alex, we were the only customers when we arrived around 6pm, but it filled up a bit later on. Service was friendly, with an obvious sense of humour.

Bruschetta was very good, and generous with the tomatoes, and garlic bread "rosso" was also very good, not dry or overly crunchy like garlic bread sometimes is. Mains included gnocchi (people seemed to like this), melanzane parmigiana (Sarah seemed happy with hers), and Kake's prawn and crab cavatelli, which came from the extensive specials board and was very good; neither stingy nor excessive with the seafood, a very flavoursome sauce, and pasta cooked just right.

On a Thursday lunchtime visit by Kake alone in October 2017, there were three other customers when I arrived around 12:45pm, and this remained the case throughout my visit. Music was playing, not too loud but somewhat cheesy.

Melanzane parmigiana (£10 on the lunch menu including sauté potatoes and green beans) photo was pretty good. The aubergine was cooked just right, there wasn't too much cheese, and the tomato sauce had a good texture and an interestingly complex flavour. The potatoes were cooked with onion and rosemary and the beans with garlic; both were also well-executed. It was also a decent size portion, and the components were well balanced; the sides went well with the main in terms of both proportions and contrast. It certainly seemed worth the price, which at first had felt a little high for a lunch menu.

Service was taciturn at first, but warmed up later. Tap water arrived in a chilled bottle which was left on the table, and black pepper was offered from a comically large pepper mill. A 10% service charge was auto-added to the bill.

Accessibility: A very shallow ramp to get in. No steps to toilets.