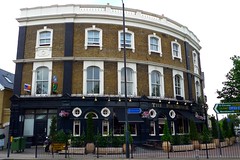 Gastropub on the north side of Wandsworth Common. It was called the Freemasons until a change of name and ownership in 2009.

This is a spacious, and as expected from the name, curved pub, which holds eight large chunky tables around the bar, with another seven or so in a room up some stairs behind the bar, where an open kitchen is located. There are a couple of other small tables dotted here and there, with a couple more just by the door, and then several very large picnic tables around the outside, some under cover.

Inside, the decor is muted, with no TV screens, and quiet jazz music playing on Ewan's June 2009 visit. Service is laid-back, chatty and friendly.

They have three handpulls, with Old Hooky, Sambrook's Wandle, and Weston's Vintage cider in June 2009. They also have a number of premium draught lagers, including Duvel Green (£2.55/half, and a mere 6.8% abv), Edelweiss, Heineken, Amstel, Sagres, as well as Thatcher's Gold cider.

Accessibility: There's no step to enter, and ladies' toilets are on the same level as the bar, though the gents are up a few stairs around the back.