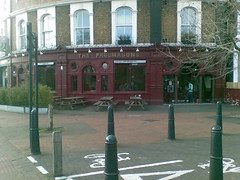 The Freemasons was a gastropub on the north side of Wandsworth Common, in the Good Beer Guide.

It closed in 2009; as of mid-2009 the site is occupied by another pub called the Roundhouse. The information below is retained for people who want to know what it used to be like.

Gastropub on the north side of Wandsworth Common, in the Good Beer Guide.

bob had the roast pork belly with mashed potato and gravy for £11.50 photo. The crackling was really very good. My brother had the pan fried cod on vegetables for £14 and a bowl of wedges for £3.50. The vegetables were quite tasty.