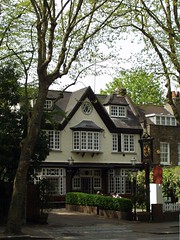 Upon entering, there are tables along the front mainly dedicated to drinkers. Moving towards the rear, the booths along the wall opposite the bar and in the space to the back (looking out to the beer garden, and getting more light), tables seem to be intended for dining and table service is offered. There are attractive beer gardens at front and back. According to their website as of February 2014, they offer hog roasts for private parties in the back garden from Spring through to Autumn.

As of February 2014, food is served noon-10pm Mon-Sat and noon-9pm Sun. Ewan visited twice in 2011 and greatly enjoyed the food on both visits. Visiting again in February 2014, the food was still of a very high standard. The menu, reprinted daily, always has plenty of interest photo of menu, Feb 2011.

In 2011, grilled Portobello mushrooms with taleggio cheese (£6) photo were an excellent starter, and for a cold day, a rich warming roasted tomato soup (£4.50) photo was served with home-baked soft bread. Ewan tried the roast poussin with hand cut chips for a main (£12.50) photo, and it was a substantial size with plenty of very tender meat. Kerry's sweet potato gnocchi (£10.50) photo, were large and tasty, on a pea puree which didn't quite get finished.

The drinks menu focuses on the wines (as well as an extensive whisky list), with a closely-printed A4 sheet of wines on the back of the menu. Nevertheless, they still offer four handpulls for ale, with a couple of regular Greene King presences as well as occasional interesting guest ales.

An advert in the July 2010 issue of the Full Pint newsletter states that children and dogs are welcome, and this is confirmed on their website as of February 2014.