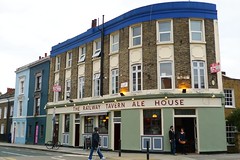 A pub just near Dalston Kingsland Station, renovated in mid-2011 and returned to its original name, having previously been called Old Henry's Freehouse.

Nestled just to the west of the station in slightly more hipster-friendly environs, the Railway Tavern Ale House (the latter appended presumably to avoid confusion with the pub of the same name adjoining the station) has bare floorboards and chunky wooden furniture, with plenty of light coming in through the windows, and three separate doors to enter. There's an attractive and ornate old fireplace, and a few well-chosen pieces of art befitting the clientele.

Appropriately to its name, there are six handpulls for ale prominent featured on the bar (very little else is visible). Upcoming beers are listed beside the bar, and there are four keg taps hidden away to the side.

On Ewan's September 2011 visit the handpulls were dispensing Adnam's Pale Ale, Redemption Trinity, BrewDog 5am Saint, Truman's Three Threads (£3.40/pint), Castle Rock Harvest Pale Ale, and one more. The keg taps had Meantime London Lager and London Porter, Licher, and Aspall's cider. No music was playing, and there were only three or four other people in on the Sunday afternoon I popped by. On a Monday evening visit in December 2011, it was also very quiet, but cosy and warm inside, and Three Threads was still on the handpulls though all the others were different.

A Thai food menu is served, with the usual dishes available with different meats (either tofu & vegetables, or pork, chicken, et al.). Ewan tried a vegetarian noodle dish in December 2011, which was nice and spicy as advertised and rather tasty.

As of the September 2011 visit, signs outside the pub advertised a pub quiz on Tuesdays.

Accessibility: There's no step to get in (just a very shallow sill), and toilets are all on the same level.