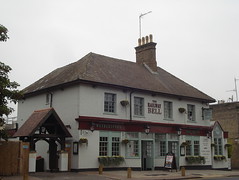 Wetherspoons pub in New Barnet, in the Good Beer Guide.

The front part has a fairly standard Wetherspoons ambience, with a low ceiling and relatively dim lighting. High chairs and tables plus a few half round armchairs give way to normal chairs and tables past the bar. The room then leads back to a lovely light, bright conservatory area, looking onto the beer garden at the side of the pub. The garden itself is divided into a patio and a (possibly astroturf) lawn, with matched wood and steel patio furniture, some of it under umbrellas. According to the 2015 Good Beer Guide, the garden is divided into smoking and non-smoking areas.

Kake visited on a Thursday morning in September 2014. There were about half a dozen other customers in at 11:15am, a couple of them having an early lunch. No music was playing, and most of the customers were on their own, so there was very little conversation except among the staff.

Accessibility: Two small steps at the front entrance, but there's flat access via beer garden and patio doors. No internal steps, and there's a RADAR-locked accessible toilet with baby change facility (a key is available behind the bar).