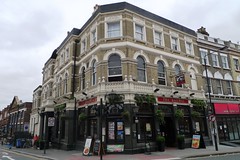 It closed for refurbishment in October 2014, and reopened in June 2015. We haven't visited since the refurb, and so some of the details below may be out of date. Before the refurb it was part of Punch Taverns's Spirit Group, but we're not sure if this is still the case.

On our November 2008 visit there were four handpulls on the bar offering three ales: London Pride, Wadworth 6X (with a cardboard-and-felt-pen sign stuck over the Deuchars IPA pump clip, £3/pint), and Greene King IPA. They also had Hoegaarden, Leffe and Staropramen, among other things. On our July 2013 visit, the handpumps were clipped for Growler Lemon Head, Sambrook's Pumphouse, Sharp's Doom Bar, and Westons Old Rosie.

Kake, Ewan, and other Tube Walkers visited on a Saturday afternoon/early evening in November 2008. Although the place is reasonably large, we had to hunt around a bit for a free table, as the seating is relatively sparse and a lot of tables seemed to have only one or two people at them. Ours was a high table with tall stools, though there was a mix of these and normal tables, most seating up to four people, as well as a raised area. TV screens were dotted around showing sport results.

On another visit in July 2013, it was almost empty shortly after noon, but there were a couple of other customers. Service was friendly. The front windows were open to let the breeze in.

According to their website as of October 2013, food is served noon-10pm Mon-Sun.

In November 2008 the food menu was the standard offerings, covering all the basic options. Our group tried one of the sharing platters, which included chicken wings, mini sausages, a small portion of nachos, flatbread, and possibly other stuff. Kake stuck to the meat options, as we had vegetarians among us, but thought the chicken and sausages were just fine.

Signs seen in November 2008 indicated that there's a pub quiz every Sunday at 8pm, and live music every Saturday. There's a pool table towards the back.

Accessibility: A shallow step to get in. There's an accessible toilet which doubles as a baby change.