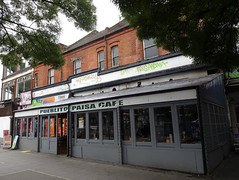 Entry is into a conservatory-style space built as a sort of lean-to; at the back of this are the service counter and small open kitchen. The menu changes daily, and there's also a display of sweet pastries and empanadas (filled savoury pastries) at the counter.

The space seats around 50 on a combination of padded folding chairs and padded backless benches arranged on either side of plain wooden tables. The floor is painted a cheerful yellow, and the bench coverings alternate between red and blue.

Kake first visited on a Thursday morning in August 2018. There were three or four other customers when I arrived a little before 11am, and others came and went while I was there. It was a warm day, and they'd opened the front windows up to let the breeze in. On another visit, a Tuesday lunchtime in May 2019, there were half a dozen other customers when I arrived around 11:45am. Music was playing on both occasions, not too loud.

In August 2018, a chicken empanada and a 300ml bottle of Columbiana soft drink photo came to £3.50. The empanada was fine, filled with decent enough pulled chicken, a few pieces of soft potato, and a hint of chilli, though overall the filling was a touch too sweet for me.

In May 2019, Kake tried one of the main dishes, cazuela de mariscos (seafood coconut stew; £13 including rice, chips, fried green plantains, and salad) photo. The stew was more of a soup, with lots of broth that was just a touch too salty to eat on its own but fine when poured over the rice; I also dipped my chips in it. The seafood comprised squid, mussels, and both large and small shell-on prawns, all cooked to a good consistency. The rice was fine, the chips actually tasted of potato, and the plantains were beautifully greaseless. I also had a blackberry juice (£3.50), which was tart, refreshing, and not overly sweet.

Service was friendly and helpful on both visits. No service charge was added to the bill.

Accessibility: No steps to get in. The toilet is in the adjacent market (ask at the service counter for a key fob). This doesn't require going outdoors or negotiating any steps, but access is a little narrow.