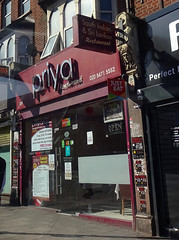 It seems to be aiming at the feel of a restaurant rather than a cafe, with linen tablecloths in white and dark burgundy; pale cream walls; and decorative moulding around the ceiling. Unlike other Indian cafes/restaurants in the area, metal jugs of water and boxes of tissues are absent from the tables here. However, the style is still fairly informal.

Floor to ceiling windows let the light in at the front, while a cosier space sits to the back. A bar divides the room in half, with fonts for Cobra and Kingfisher lagers; they also have a short wine list.

Kake and Laura visited on a Tuesday evening in September 2013. There were half a dozen other customers eating in when we arrived around 6:15pm, and plenty of of others coming in and out for takeaways. No music was playing when we arrived, but it was switched on around 6:30pm.

Gobi 65 (£4) was disappointing; there was no crispness in the batter, and the cauliflower itself was slightly undercooked. It was relatively spicy though (in contrast to our other dishes).

Mutton kotthu roti (£6) had a fairly low proportion of roti to other ingredients, though this worked fine. It came with a small bowl of curry sauce to moisten the dish. The mutton was generally pleasantly chewy. Spicing was mild even though we'd asked for medium (perhaps they toned it down automatically because neither of us is Asian).

Dhal curry (£2.75) was savoury and comforting. Palak paneer (£4.25) was brown in colour rather than green (which is usually due to overcooking the spinach), but tasty enough. Lemon rice (£3.50) was nicely tangy.

Tap water, although requested when we ordered, only arrived halfway through our meal, and there was no offer to top it up. No service charge was added to the bill photo.

Accessibility: A very small step to get in. It's step-free through to the toilet (a single large cubicle) but access to this is quite tight, as the door out to the corridor is behind a table and the cubicle door is very wide and opens out into this corridor, giving almost no room for you to stand while you open the cubicle door. It would be very difficult to get a wheelchair through.