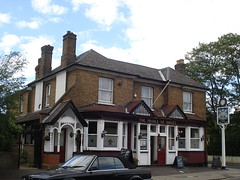 The decor inside is fairly sparse, with exposed floorboards and two blackened brick fireplaces hung with horse brasses. A few bar stools stand along the bar, while hints of a past division into bar and saloon are still present, although there's no longer any barrier between them. To the right of the bar is an area with a flatscreen, while to the left is a more saloony area including a couple of firm leather sofas and some widely-spaced sets of chairs and tables. There seems to be a separate restaurant area through a door at the back (was laid out as such at lunchtime). There's a beer garden at the side of the pub.

Kake visited on a Thursday early evening in May 2011. There were five real ales on: Tribute and Sundancer (the regulars), Downton Quadhop (£1.55/half), Sharps Own, and Windsor & Eton Guardsman. Another pump had a clip for Dark Star Partridge and a note that it was still conditioning. A small board on the bar listed other guests that were coming soon. They also had country perry and Cheddar Valley cider.

There was no music playing, but there was plenty of animated conversation going on among the dozen or so customers in (including one rather excited child). It does appear to be family-friendly, since there was a small selection of children's books and games laid out on a table in the corner.

On a previous visit by bob and family on a Saturday lunchtime in November 2008, the guests were Autumn Blaze and Adnams Broadside (all ales priced about £2.70/pint). They had Tavern Snacks crisps, which were very tasty. They weren't serving food on our visit, possibly since they were catering for a birthday party.

According to a board seen in May 2011, quiz night is Thursday from 9pm.

bob's verdict: It's far enough away from the stadium to still be a pleasant pub on match day. While the customers will mostly be rugby fans, you can still get a table and it's not rammed.

Accessibility: Steps to get in at the front entrance, but if you go to the side there's a steepish ramp to a sort of verandah thing, and it's level to get in from there (with just a small ridge at the doorway). Stepfree to the ladies' once you're in (not sure about the gents'). Stepfree access to the beer garden from the street, but to get from pub to garden without encountering steps you'd have to go out to the street and back in again.