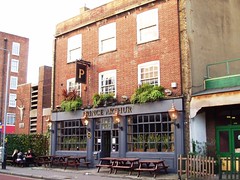 Pub around the side of Euston Station.

Inside, there's some sofa seating on one side, with four larger tables along the front with banquette seating, and four more to the rear on the other side of the pub. There's also a couple more small tables, around half of them set for service at lunchtime. Lighting is kept fairly low, and in the evening on a June 2007 visit there was (almost but not quite too loud) music playing. On Friday evenings, it gets predictably busy with after-work crowds.

It does have outside seating, where you can smoke; although this is directly on the rather busy (and seedy) Eversholt Street, it's not too unpleasant.

On Kake's visit in June 2007 there were four real ales on -- Landlord, London Pride, Greene King IPA, and Spitfire. Two years later, on a July 2009 visit, the first three were the same, with Summer Lightning as a guest (£1.60/half). They have several draught lagers as well, including Hoegaarden, Grolsch, Heineken, and Beck's Vier.

The menu used to offer Thai food, but now offers a fairly interesting gastro-style menu photo of menu in July 2009. Ewan tried the roast mushrooms with spinach, thyme and goat's cheese for lunch (£6) photo, which was a good size for the price. Rocket leaves were piled on top, and it seemed as if they used another meltier cheese as well (perhaps brie), but it was a good dish with strong flavours and nicely presented, which bodes well for the rest of the menu.

(When last we checked, in 2007, it was closed on Saturday evenings and didn't open at all on Sundays.)