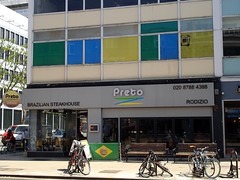 Brazilian restaurant in Putney, located in premises previously occupied by a branch of The Real Greek.

Preto follows the rodizio format: you pay a fixed price per head (£20 as of April 2011) and "passadors" (waiters) bring skewers of meat to you fresh from the grill and carve them onto your plate. There is also a buffet area containing salads and several "traditional Brazilian hot dishes", of which your reviewer recalls a kind of chicken lasagne. A £15 (April 2011) option is available if diners wish only for items from the buffet.

elvum and bob visited on the Thursday night before a bank holiday in April 2011, and found it busy, but not full. All the rodizio options were good, but the standout dishes were the rump steak (rare, exquisite) and the beef ribs (melt-in-the-mouth good, hence presumably not actually cooked under the grill).

The only down note was a 10% "mandatory cover charge" that appeared on the bill, which we had not previously noticed.

Accessibility: A ramp to get in. There used to be an accessible toilet on the ground floor when it was The Real Greek, but we haven't confirmed that it's still there.