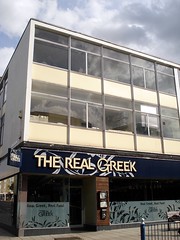 This was a Greek restaurant in Putney, part of a small chain with half a dozen branches scattered across London. It has now closed, and as of September 2010 the site is occupied by the second branch of Preto.

Greek restaurant in Putney, part of a small chain with half a dozen branches scattered across London.

Kake, Ewan, and five other Tube Walkers visited on a Sunday evening in March 2009. There were only a few other customers, and indeed the staff seemed a little bemused to have any customers at all; the first few things we tried to order had run out "because it's Sunday", and more than one other table sported uncleared dirty dishes (and in one case a lone slice of cake on a cakeboard) throughout our visit. We were seated promptly, but left without menus for so long that we ended up going and getting them ourselves; similarly, we had to send a scout out to let the staff know we were ready to order.

We ordered a selection of mezedes (mezze) to share, as well as a vegetable souvlaki photo. The way it works is that the cold mezedes arrive first, then the hot ones turn up when they're all ready. If you're still hungry after you've finished your first round, you can order more (and we did). Neat little tiered trays, a bit like small cakestands, are used to ensure everything fits on the table at once.

Vegetarian and vegan options are marked on the menu, and at the time of writing the menu on the website lists 13 vegetarian mezedes, 7 of which are vegan (though the bread, which would form the basis of a mezedes meal, isn't marked vegan, so the utility of the vegan options is debatable), plus the vegetarian souvlaki.

All the food was fine (except the chicken and pork skewers, which had a good flavour but were very dry) and some of it was notably good. The grilled octopus was excellent; thick, meaty slices cooked just enough to get a char but not so much that they went chewy. Spiced tiger prawns weren't bad either. Tiropitakia (filo parcels with spinach, leek, and feta) arrived hot, well-filled, and non-greasy, and were enjoyed by all. Htipiti (a coarse puree of feta cheese with roasted red peppers and red onions) went down well, and melitzanosalata (smoked aubergines with garlic, herbs, shallots, spring onions and lemon juice) proved that the kitchen's not afraid of the garlic — which is as it should be.

Along with five bottles of house wine between the seven of us, and plenty of food, we paid £30/head, which for that amount of wine is not really a ripoff.

Kake's verdict: I might come back, but probably not on a Sunday. Though I'd make a reservation or a plan B, since a lot of the seating is too high for short people like me to be comfortable on.

Accessibility: There's no step to get in, and there's an accessible toilet on the ground floor (other toilets are quite a trek upstairs and along corridors). Much of the seating is high tables and stools, but they do have some normal seating as well.