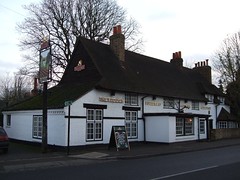 A Fuller's pub in the Norwood Green area of Southall, and one of the oldest pubs in its estate. As of June 2009 it's run by the same people as O'Brien's in Brentford (the visit described below predates this change of management).

Befitting its tradition, this certainly is a pub with historical character. Creaking wooden floorboards and a roaring open fire which lies between two separate rooms and is open to both (you can see through the fire to the bar area). In the winter months, this makes the pub cosy and warm, a very pleasant place to while away a few hours.

The second room has more a living room feel, with a darts board at one end. Tables are large and solid throughout the pub, and service is friendly enough. There is a large beer garden out the back.

There are three handpulls on the bar and a chalkboard suggests guest beers are put on, though there were none on a December 2008 visit and the chalkboard was empty. Two of the three pumps had London Pride (£2.85/pint) and the other was empty. However, the London Pride was excellent, with a naturally frothy head.

Food is served noon-2:30pm and 6pm-9pm Tuesday to Saturday, and noon-3pm on Sunday. Unfortunately Ewan arrived just too late to sample lunch fares.

Accessibility: There are three steps at the front entrance, but a path leads around the side to an accessible entrance by the beer garden. Inside, it has been sensitively improved to allow step-free access between the rear entrance, where the toilets (including one specifically marked as accessible) can be found, and the drinking and bar area via a wooden ramp.