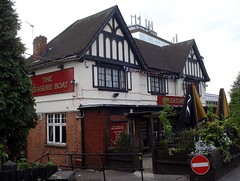 Now closed; was a pub near Alperton Station. According to the Oct/Nov 2014 London Drinker, the premises have changed hands, been refurbished, and reopened as the Boat.

The information below is retained for people who want to know what it was like as the Pleasure Boat.

Inside, the floorboards are bare, and the tables are wooden and scratched. Various items hang from the ceiling, including vinyl records, life preservers, disco balls, and inflatable pints of Guinness. There's at least one pool table. There's a patio at the front of the pub, sheltered from the traffic by a wall and some shrubbery, and a garden with picnic benches down by the side of the canal. The interweb suggests that the canalside garden is floodlit in the evening (and very crowded in the summer), but I don't know if that info is up to date.

Kake visited on a Thursday early evening in April 2011. They don't have any handpumps for real ale, though they did have John Smith's Extra Smooth and Extra Cold on tap. A half of Strongbow was £1.60. Service was friendly enough.

There were around ten or so people in when I arrived a little after 5pm, mostly in pairs. One of the flatscreens was showing TV with the sound on.

According to a sign seen outside in April 2011, the pub hosts a disco every Saturday from 8pm.