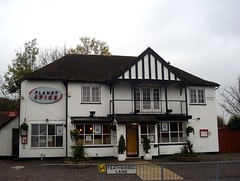 Wonderful, but un-pretentious, 'posh' [0] Indian restaurant in the wilds of south-east Croydon (but quite handy for the tram). Sister restaurant to Babur, though Planet Spice is the more upmarket of the two.

They have at least two menus at any time, the main menu and the 'favourites' menu. The former changes regularly and includes things like ostrich cooked in the tandoor, sea bass with lime and coconut sauce and venison steak with masala mash (at April 2008). There is also a very good selection of vegetable side dishes, all of which Flick recommends, and a range of breads.

The favourites menu is also the takeaway menu, and is mostly more standard Indian restaurant dishes, as well as a couple of the very popular things that have been retired from the main menu. As well as these two, there are periodic food festivals. It's well worth visiting when they're on, as the special menus always have a very good range of dishes.

There's a good wine list, which sometimes has very good deals on half a dozen bin-end wines, and a wide cocktail list, including some very tasty non-alcoholic choices.

Planet Spice runs a loyalty card scheme. The card can either be used to get ten percent off the bill or to get points worth ten percent, which can be saved up to pay for all (or part) of a future meal. If you join the scheme, you also get vouchers for your birthday, and things like that.

Typical meal prices are around £35 per head (based on four people, in April 2008, each having a starter and main plus a bread basket, four side dishes, two bottles of wine and a few other drinks).

[0] For values of 'posh' where Flick uses a knife and fork, rather than eating with bread.