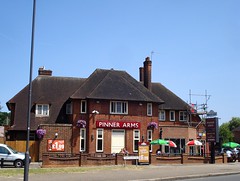 Greene King pub in Pinner. It's fairly large inside. There's at least one sofa (large, squashy, and leather), and there's a pool table too. The car park has a stand-up smoking shelter, but there's also some nice enough covered-over seating along the side of the pub, as well as tables with parasols at the front of the pub.

There are three handpumps on the bar. In May 2009 the only real ale available was Greene King IPA (£1.25/half), while in July 2013 this had been joined by Old Golden Hen.

On a Thursday afternoon in May 2009, there were about half a dozen other customers in. A few flatscreens were showing cricket with the sound off, and music was playing quietly in the background (instrumental jazz, country music, Irish music, Bee Gees.) The situation was pretty much exactly the same on a Tuesday afternoon in July 2013, though there were more customers sitting outside; it was a pretty hot day, and the pub was unpleasantly warm inside.

According to a sign behind the bar in July 2013, quiz night is Tuesday at 9pm.

Accessibility: Step-free access to the bar, toilets, and some of the seating area. The pool table is up a couple of steps.