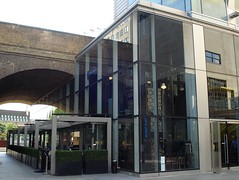 Dim sum restaurant on the South Bank, part of a small "modern-style" chain with branches on Goodge Street, in Soho and near St Paul's, among other places.

Kerry visited on a Tuesday evening in August 2011. Although there was no trouble getting a table in the small outside terrace at 6pm, by the time I left at 7pm both the outside and more spacious inside were packed.

Both the food and the cocktails (watermelon cardamom martini and blueberry cheesecake "dessert cocktail", both £6) were tasty without being amazing. The scallop and shiitake dumplings (£3.49) and prawn toast with sesame seeds (£4) were cooked well (although the prawn toast was slightly overfried), and the honey-glazed hoi sin vegetable puff (£3.79) was delicious: it tasted light but was filling, and the honey and spice flavours complemented each other exceptionally. The only disappointment was the "signature dish" of king prawn and garlic black dumplings (£4), which were overcooked to the point of falling apart as I picked them up, although the flavours were very good once I managed to get them in my mouth (it's hard to go wrong with garlic).

The service was friendly and rapid, even though it was quite busy by the time I left. There is an option on the ordering sheet to write in what time your table would like to finish by, a good idea in a location next to the Southbank Centre, the BFI and the NT, where patrons are likely to be pre-show diners.

Kerry's verdict: I'm sure there is much better dim sum in London, but I wouldn't hesitate to go here again if I were looking to eat in the area.