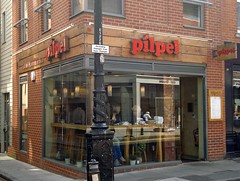 Although they don't explicitly say this anywhere, their menu photo as of May 2011 appears to be entirely vegetarian. It's tightly focused on falafel and houmous, served separately or together, with optional white or wholemeal pitta and extras such as aubergine, guacamole, feta, hard boiled egg, and various salads.

It's a fairly small space, with the only seating provided by high stools at a couple of counters running along the walls. However, several of the reviews linked below suggest that they have some normal chairs and tables out on the street when the weather is good enough. Appropriately enough given the focus on chickpea-based foodstuffs, there's a display of dried chickpeas piled up behind a glass sheet beside the till.

Kake popped in for a takeaway on a Tuesday afternoon in May 2011, choosing falafel in a wholemeal pitta (£4.25 including salad, tahini sauce, and chilli sauce). Although the Time Out review linked below states that the falafel are fried fresh in front of you, this wasn't the case on my visit; the staff member serving me simply disappeared into the back for a moment and came back with my falafel.

The falafel weren't bad, though; green with herbs, and with a good granular texture yet not dry at all. The pitta was good too, soft and not dry. I also liked the texture of the bulgur in the tabbouleh, and I liked that the staff member made sure I had plenty of tahini sauce throughout the sandwich and not in just one dollop.

Kake's verdict: Very competent though not earth-shattering. I'd happily order from here again if I happened to be passing.

Accessibility: No step to get in, just a ridge. Don't think there's a toilet. All of the interior seating is on high stools.