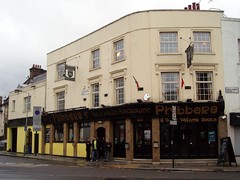 Phibbers was an Irish pub on Holloway Road in Lower Holloway. As of December 2015 the premises were occupied by the 12 Bar Club, which moved here from its previous location on Denmark Street. However, according to the Apr/May 2016 London Drinker magazine, this itself was "[c]losed and boarded suddenly in February [2016]".

They don't have any handpumps, but obviously they have Guinness, and they also offer Tayto brand crisps. The building looks quite big from the outside, but there's less space inside than you might expect, with the drinking area wrapped around the bar and opening up into a pool room towards the back. It's dark and cosy rather than light and airy, but this works well.

There's more seating on the first floor, as well as another bar, but this isn't always open. There's a restaurant space on the top floor, which appears to have changed hands a few times; as of 2009 it was occupied by Dastarkhan, a Kazakh restaurant, and as of 2011 the occupant is Cigansky-Rai, a central Asian/eastern European restaurant.

Kake and Laura visited on a Thursday afternoon in April 2009 to meet up with a couple of friends before having dinner in the Kazakh restaurant on the top floor. A cup of tea was £1.20. Service was friendly enough. A TV was showing cricket, and music was playing very quietly in the background.

Accessibility: A step or two up to get in, but it's on the level once you're in.