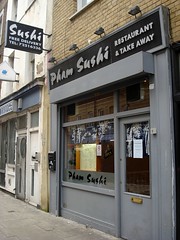 Japanese restaurant on Whitecross Street, near Old Street Station. They also offer takeaway, and will deliver within 1 mile radius of the restaurant (last delivery orders 15 minutes before closing time). Note that they're closed on Sundays. They also have another branch a few doors down at number 165.

itsbruce worked a few minutes' walk from this place for several years, and tried to come here once a week. Lovely food.

Manne visited with some friends in August 2007. The highlights of our meal were yellowtail with jalapeno, lovely seared toro (fatty tuna, it really tasted and felt like the most tender meat I'd ever eaten), and scallops with spicy creamy sauce. The staff were very friendly.

Manne's verdict: Amazing. Some of the best sushi I have ever had. This is a must visit for anyone who loves sushi, those who want to have some really good sushi, virgins who won't mind trying sushi to see what the fuss is about or even food cowards who shudder at the thought of raw fish. Heck, even you who absolutely abhor sushi should go here. Pham Sushi will make you change your mind.