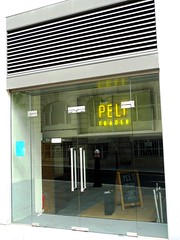 Small pub in a railway arch under Cannon Street Station.

bob and others visited on a Wednesday night in October 2015. By 6pm there were no free tables, which wasn't helped by half the available seating space having been reserved for a large group. There was still plenty of room to move around and the bar was never that busy. We found an alcove to hide in with some used casks. There was a large choice of beers including several from the Bexley Brewery, and all of the beer was kept well.

The food is limited to pizzas and cured meats. Martin had an 18 inch pizza photo which he was very happy with. Ilmari and Steve also enjoyed theirs. The beer sticks (cured pork sticks; £1.50 each) were tasty, and they also had interesting jerky for sale.

Accessibility: Several steps at the entrance. Level to the bar after those. Steps up and down to the toilets. All tables are high, with high stools to sit on.