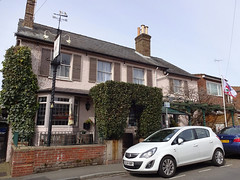 Child-friendliness: A sign seen in March 2016 warned that children are not permitted inside after 6pm.