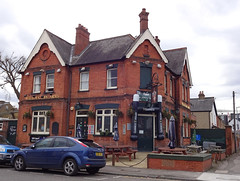 Locals' pub in the residential streets to the north of Kingston, in the Good Beer Guide.

Although the interior is all interconnected, it's divided into different areas with their own ambience, and doorway-shaped gaps in the walls make it clear that these were once physically separate.

Entry is into a traditional drinkers' area, with a patterned carpet, half-panelled walls, and frosted glass windows. Stools line the bar, and old beer bottles and an array of framed Pub of the Year certificates are displayed on the gantry above. Stuffed animal heads are mounted on the walls. A quieter area is to one side, a "sports bar" with dartboards and a large screen is across the other side of the servery, and there's a pool room and a beer garden out the back.

When bob visited on a Monday afternoon in February 2008 (and took advantage of their free wireless internet to update this page), London Pride was £3/pint and they also had Brakespears on. (There might have been other beers on the other side of the bar.) They were advertising four-pint jugs for decent prices on rugby match days.

Kake and Shuri visited on a Wednesday afternoon in March 2016. There were quite a few people in when we arrived a little before 2:30pm, most of them watching cricket on the large screen in the sports bar.

The handpumps, divided between the main bar and the sports bar, were clipped for Twickenham Grandstand, Twickenham Winter Cheer (a special offer of £1.50/half), Weltons English Pride, Surrey Hills Shere Drop, Sharp's Atlantic, and Sharp's Doom Bar. They had extra pump badges to let people in both areas see the full range on offer. A cup of tea was £1, and made exactly to Shuri's specification; they even provided a little plate to put the used teabag on.

Food is restricted to pizzas (Chigago Town brand, not ready made) and the like. According to a sign on our visit, there's a regular open mic night.

Kake's verdict: This is perhaps my favourite of all the pubs I've visited in Kingston, though on our March 2016 visit there was a somewhat unpleasant musty smell.

Accessibility: No step at the main door; on our visit, this was locked with a sign stating that this was because of strong winds, but it seems likely that even if it's locked when you visit they'd be happy to open it if you need them to. A couple of steps at the side door. Accessible toilet on the level once you're in (a step to the ladies'; gents' not checked).