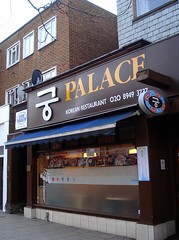 Korean restaurant on the High Street in New Malden. According to the frontage, its Korean name seems to be 궁. It also does takeaway and delivery. Vegetarian options are marked on the menu, though there aren't very many of them. For some reason it offers a handful of Northern Chinese dishes as well as Korean, on their own page of the menu at the back.

It's pretty small, seating around 40 or so in total. Many of the tables have built-in barbecues. A couple of the tables are in little private booths.

Jo, Kake, and Sarah visited on a Thursday evening in October 2013. It was fairly full when we arrived around 7:15pm, but there were a couple of free tables so we didn't have to wait.

Four complementary banchan were set on the table shortly after we sat down: beansprouts, spicy cucumber, kimchi, and seaweed in sesame oil photo. We then ordered five dishes between the three of us, which was possibly very slightly too much, but only slightly.

Kimchi pancake photo was hot and tasty, with not too much grease.

Spicy crab photo was delicious, with plenty of savoury chilli sauce coating chunks of shell-on raw crab. The crab flesh was cold and sweet, though sucking it out of the shell proved a bit too much for some of us. (When we ordered this, our waiter was careful to make sure we knew it came raw.) This came as a set with rice and steamed egg photo, both of which were fine, though there was a fair bit of liquid in the bottom of the steamed egg dish.

Chilled glass noodles photo were a little tricky to share out — presumably they're intended as a dish for one person — but were well worth the effort. The broth they came in was light and flavourful, and the noodles had good texture.

Dolsot bibimbap was advertised on the menu as "mixed vegetable with rice in hot stone bowl", so it was a little surprising when it turned out to contain meat as well, but this was easily picked out.

Stir fried pork with chilli was approved of by Sarah; this also came with rice.

Our food came very quickly, with the first dish (spicy raw crab) arriving within 10 minutes of ordering, and everything else being on the table within the next 5 minutes. It didn't come in any particular order. Our final bill was £61 including a bottle of house white wine (around £17) and an auto-added service charge.

Kake's verdict: I would happily go back just for the crab and the chilled noodles.

Accessibility: Step-free throughout, including to the toilets.