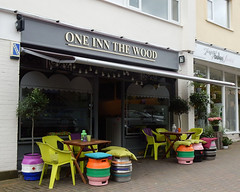 Micropub in Petts Wood, in the Good Beer Guide.

It's a small single room, with bare floorboards and large windows at the front. Most of the seating is provided by high tables along the walls, with narrow banquettes behind and tall stools in front, though this is supplemented by a few cushion-topped casks in one corner. A rather sexist joke is painted on the wall around the corner from the bar to point the way to the toilets, the interiors of which are graced with yet more sexist jokes.

A couple of tables sit outside on the pavement, with colourful chairs and more of those cushion-topped casks. Behind the small brick-built bar in one corner, a glass door offers a peep through to the "cellar" where the real ales are dispensed on gravity.

Kake visited on a Friday early evening in September 2015. There were already half a dozen people in when I arrived 5 minutes after their opening time, and 10 minutes after that there were more like 15 or 16, plus two dogs. Many of the other customers seemed to be regulars, and most people were in groups of four or more. No music was playing, and there was plenty of lively conversation going on.

According to their website as of August 2015, the only food they serve is bar snacks such as sausage rolls, cheeseboards, and salami.

Accessibility: A very small step to get in (about an inch). Almost all of the interior seating is at high tables with high, narrow banquettes behind and tall stools in front, though there is at least a sort of step to make it easier to get up there. No steps to the toilets.