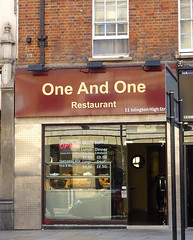 Previously entirely vegan, as of early 2012 Vegetarian London Updates reports that they've started serving meat. An anonymous commenter (January 2013) tells us that they also do seafood, the vegetarian options are now more limited than before, and the buffet is now £9 at weekends.

Note that our comments below predate this change.

On elvum's April 2008 visit, there was a good selection of hot and cold food, the former being mostly vegan versions of well-known Chinese restaurant dishes (eg sweet and sour "pork", "duck" pancakes, "beef" in black bean sauce, etc). Drinks (all around £1.50) were tea or fruit-juice oriented, but no alcohol. There was no problem getting a table on a Wednesday evening. The 10% service charge was perhaps a little surprising for a buffet restaurant.

Toilets (reasonably clean) were down steep stairs at the back. Decor was an interesting mixture of "antique" tables and mirrors and rustic jungle furniture. Overall, it wins on price, veganness (if that matters to you) and proximity to the tube station, but is only average in most other respects.

(Note that Indian Veg Bhelpoori House, N1 9EX is just around the corner, almost entirely vegan, and even cheaper.)

This place used to be called "Tai" or "Tai Buffet", then changed its name to "Veg" photo, then changed it again to "AOne" photo, and as of May 2014 it's called "One And One". It also used to be at 13 Islington High Street (see photo of the old location), but is now a couple of doors down at number 11.

It closed temporarily, presumably for refurbishment, in early 2016 photo but was open again by September 2016.