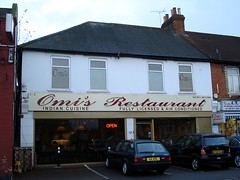 Omi's was an Indian restaurant in Southall. According to Google Street View, it closed down by July 2017.

Indian restaurant in Southall, in the 2007 Good Curry Guide.

Kake, Ewan, and James visited early on a Thursday evening in December 2008. Arriving around 6:30pm, we were the first customers of the evening.

We shared a couple of starters between the three of us - gol gappa and papri chaat, along with a portion of achaar (pickles) photo. Although gol gappa is not the most intuitive of things to eat, there was no attempt made to ensure we knew what to do with it. Luckily, we did. Kake thought the gol gappa and papri chaat were both great, though the pickles were disappointing, with an overwhelmingly harsh vinegar flavour and very little else.

For mains, we had saag photo, bangan bartha photo, bhindi masala, and Satya's special lamb, along with some maki di roti, paratha, and pilau rice on the side. The saag was pretty good; the bangan (aubergine) was less good - only a very faint smokiness, and too much onion.

Although the food was good, the service was a little odd. There was no attempt to make us feel welcome, and indeed Kake wondered at several points whether we were being metaphorically sniffed at for some kind of etiquette breach. My questions about the food were either dismissed or ignored - and I don't think they were either stupid or uninformed questions. For example, I asked if the gol gappa and papri chaat would be too similar to each other, knowing that they were both likely to involve tamarind and crispy things, but all I got in reply was "they're different things" - they are, indeed, different things, but when they arrived they were quite as similar as I'd suspected, and I'd have preferred to have something more contrasting. Table-clearing between courses was also quite clumsy, with plates being stacked and restacked in front of us and the table wiped with a paper napkin plucked out of a spare water glass.

The service issues were rather confusing, since this isn't a little hole-in-the-wall place; the decor is relatively smart and modern, and their website implies that they want to be seen as a comfortable and contemporary place. The food is well-priced, though, and good enough to allow overlooking the service problems, if you're forewarned.

Kake's verdict: I'd not say no to coming back, but the service was very offputting and I'd rather try one of the many other Indian restaurants in the area.