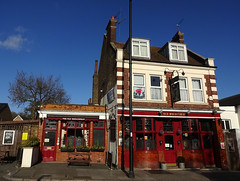 This two-room pub appears to have been extended at some point, as one half of it has two stories while the other has only one. It also has a covered, heated patio with picnic benches.

The one-storey side of the pub is a single compact room, with seating for around 20 or so at varnished dark wood tables set with small stools and chairs. There's a decent-sized leather sofa at the end, commanding a view of the entire room, such as it is. Decor is traditional, in shades of burgundy and cream. The walls are wood-panelled, the carpet is discreetly patterned, and the windows are half-frosted with decorative leading at the top.

Kake first visited on a Tuesday afternoon in September 2011. Only the smaller side of the pub was open (the member of staff on duty explained that the other wouldn't be opening until later that day, since they didn't expect enough customers for it to be worth it). There were three or four other customers in during my visit, and Magic Radio was playing music, adverts, and traffic news. Four real ales were on: Wadworth 6X (£1.65/half), Courage Best, Sharp's Doom Bar, and Adnams Bitter.

On another visit on a Thursday lunchtime in November 2017, again just the smaller side was open; the bar staff said this is always the case before 4pm on weekdays. When I arrived at their opening time of noon, three other customers arrived alongside me, and two others turned up half an hour later. There were three real ales on this time: Sharp's Sea Fury (£4/pint), Courage Best, and Black Sheep Bitter. A pint of lime and soda was £2.20.

In September 2011 they appeared to do food of some kind; there was a menu on the bar, and a sign said that food was served from noon. However, no such clues were in evidence in November 2017, so they may have stopped doing it.

A sign seen in November 2017 mentioned a quiz night every Thursday from 8:30pm, and another seen in September 2011 advertised live music every Saturday from 8:30pm-midnight.

Accessibility: No step to get in at the smaller side (on the left as you look at the pub from outside). Step-free to bar, seating area, and toilets once you're in, though the cubicles in the ladies' are a bit small. There's a step to the patio garden from inside, not sure if there's access from the street. Also not sure about access to the right-hand side of the pub, as it wasn't open on either of our visits.