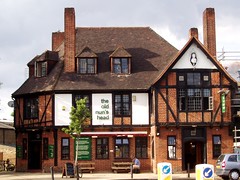 This pub in Nunhead, an historic focus for the community, was renovated after a period of closure by the people who did the nearby Gowlett. It changed hands again in early 2010; see Brockley Central interview with the new leaseholder.

Not unlike pubs in nearby gentrified East Dulwich, the place gets busiest in evenings and on weekends, when there's a surfeit of families out for Sunday lunch. Generally, though, there's enough space to find a table in the main room (the two comfortable booths opposite the bar are often taken early), and it's particularly pleasant for reading the Sunday papers, which the pub provides. A selection of board games is available from the bar. A smaller area to the west side of the bar has a TV where sport is shown (if there's any significant fixtures on), and several large comfortable couches (and a fireplace), but it's easy to get away from this if you're not interested.

The wine range is small and interesting, as are the beers (lager options include Staropramen) and spirits. There are four handpulls for ales including a number of guest ales available, alongside regulars like Adnam's. On Kake's July 2011 visit, the ales were Shepherd Neame Whitstable Bay, Triple fff Moondance (£3.30/pint), Mordue Radgie Gadgie, and Caledonian Nectar; I was offered a taster of the one I was interested in, and also given the option of a straight or handled glass. Two-pint takeout containers are available for those who wish to take some ale home with them. They have also hosted occasional (albeit small) ale festivals, on which occasions they've set up additional casks in the beer garden area out back, where there are several tables for outdoor seating (some covered).

There's a small, but well-chosen, food menu photo, which as of July 2011 offers both "Thai" and "Western" food, the previous head chef having moved on in May 2011 to be replaced by a Thai chef. We're not sure of the exact food serving times, but on a Wednesday in July 2011 the kitchen opened at 6pm. (It's worth noting that there was quite a rush to order as soon as this happened; Kake's order of a fairly simple starter, placed at 6:05pm, ended up quite low down in the queue and hence took 35 minutes to arrive.) On Ewan's November 2011 visit, the chicken burger (£11) was impressively big, with plenty of chips, and very satisfying.

There is also a separate Sunday roast menu, which is not extensive (pork, chicken, beef and a nut roast) but the options were all pretty decent on Ewan's experience of eating here, admittedly prior to the change of chef (but standards since have been retained, and they still do Sunday roasts). Both times Ewan ate here (in September and October 2010), the food was excellent, with a particularly tasty pork belly selected from the specials board (which usually lists two or three additional menu items).

On Kake's July 2011 visit, the Thai chicken satay skewers (£5) photo were pretty good; not too dry, and with just the right level of turmeric flavour, though perhaps a touch too salty. The accompanying peanut sauce was coarsely ground and clearly made from peanuts rather than peanut butter.

A function room upstairs can be hired, and there are occasional live music nights or local community events taking place. As of November 2011, when Ewan and Kerry attended, there's a pub quiz every week on Thursdays at 8:30pm, with a £2 entry charge and a fairly small bar tab for a prize. They also do a jackpot raffle draw which leads to a 'Play Your Cards Right' round to determine whether the jackpot is won.

Accessibility: Step-free to get in, to the bar, to all the seating on the ground floor, and to the toilets, including a dedicated accessible toilet.