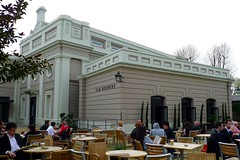 Pub and restaurant in Greenwich.

It was previously owned by the Meantime Brewery, who did a small amount of brewing on this site, including the Hospital Porter and some special smaller batches. However, the Jun/Jul 2016 London Drinker reports that it was taken over by Young's in early 2016.

We haven't visited since the change of ownership, so some of the details below may be out of date.

The pub and restaurant are kept separate, with the latter housed in a very high-ceilinged area to the right of the main entrance. The vats for the beer are stacked along one wall of the restaurant, while a distinctive decoration made of thousands of beer bottles overhangs a long line of tables in the centre of the space. Smaller tables are recessed in boths around the outside.

The bar area is on two levels, with some table seating at the higher level for about 10-15 people, while tables with high stools are dotted around the rest of the space. The bulk of the seating is outside in the large walled courtyard, many of which have umbrellas for protection from the elements.

There are three handpulls at the bar for ale, of which one is always the Meantime London Pale Ale (£3.60/pint), and others that Ewan has spotted have included Dark Star Hophead and Adnam's Broadside. There are also a large number of draught taps, most of which dispense Meantime beers (including London Lager, London Stout, Hospital Porter, Helles, Kellerbier, and a keg version of the London Pale Ale), as well as a few other well-chosen beers (Schonram Helles, Pils and Dunkel, Brugse Zot, and Mort Subite Kriek). Wines and bottled beers are also available.

According to their website as of September 2011, the restaurant is open 6pm-11pm Mon-Sat and 6pm-10:30pm Sun, while food is served in the bar and cafe during the day. Ewan has tried the food in the restaurant in April 2010, which was excellent. The menu presents beer-matching choices for all the dishes photo of restaurant menu in Apr 2010. A goat's cheese mousse with marinated vegetables (£6) photo was a suitably light starter, while roasted fillet of hake (£14.50) photo was beautifully cooked, and served in a crab broth. There's a smaller bar menu photo of bar menu in Apr 2010, and the food is more matched to a pub environment, with fish & chips, burgers and the like.

Ewan's verdict: This venture feels far more like an American or New World beer bar than many others in the capital, with its bright open-plan location, microbrewery, focus on an extensive selection of lagers, and large courtyard perfect for summertime drinking.