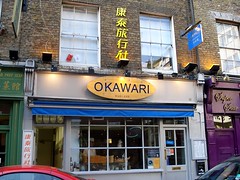 The information below is retained for people who want to know what it used to be like as Okawari.

Japanese restaurant on the south edge of Chinatown. The decor is pale wood style, bright lighting, sort of posh canteen like.

Kake and friend visited on a Wednesday evening in April 2008. We shared yakitori (fine) and ebi gyzoa (prawn dumplings; OK if unexciting) to start. I followed this with the sushi/sashimi/maki bento box photo, which wasn't bad. It cost either £10 or £11, and contained three nigiri, six pieces of sashimi, and four maki rolls plus some salad. It also came with some decent enough miso soup.

Service was fine, and they didn't bat an eyelid at being asked to bring multiple flasks of sake (this last point is the reason why this review is not as detailed as mine usually are...)

Note that at the time of writing the prices on the menu on their website are somewhat cheaper than the prices charged; this may be because the menu is for their Ealing branch.

Kake's verdict: Might come back. The food was fine but the ambience was more of an "in and out again" thing rather than somewhere to linger.