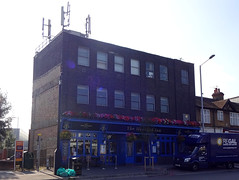 It's a fairly standard Wetherspoons, with a low ceiling, patterned carpet, booths along the walls, and very little natural lighting. There's quite a lot of space stretching back from the street frontage, filled with chairs and tables. A functionally-built bar is to one side, with two banks of handpumps.

Kake visited on a Tuesday morning in September 2019. It was pretty busy at 10am — all the booths were taken, and people of all ages were in eating breakfast, having a chat, or sitting with a coffee — though it quietened down as the breakfasters gradually left, and by 10:30am there were only half a dozen customers. No music was playing, as is usual for Wetherspoons.

Child-friendliness: As in most Wetherspoonses, children are welcome during the day. There were several preschoolers and babies in during our visit. There's a pull-down nappy change in the accessible toilet (requires RADAR key from behind the bar).

Accessibility: No steps to get in, and there's a RADAR-locked accessible toilet on the level. Other toilets are up steps on the first floor.