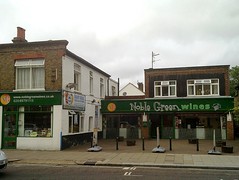 Off licence in Hampton Hill, in the Good Beer Guide.

When bob visited in September 2012, there were about eight barrels of real ales and ciders on stillage; these can be purchased by the 2, 4, or 8 pint container. They also do larger containers such as polypins.

As well as this, they have a wide selection of bottled British and foreign beers, some of them sold pre-chilled from fridges. There are deals on buying multiples of things. Also quite a large wine selection.

Accessibility: No step to get in. The beer section is a bit cramped, but the wine section is more spacious.