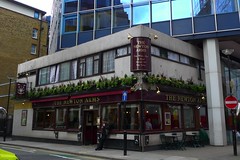 The Newton Arms was an unpretentious boozer in the backstreets between Kingsway and Drury Lane, in Holborn. According to the Dec 2014 London Drinker, it has now closed and its future is "uncertain".

Unpretentious boozer in the backstreets between Kingsway and Drury Lane, in Holborn.

Despite looking for all the world like a dodgy estate pub, this is in fact a very decent place for a drink. After all, this is central London, a short walk from the heart of Covent Garden. Service is particularly friendly and prompt, and the place never gets quite as packed as some of the trendier bars (not to mention the Wetherspoons by Holborn Station). Clientele tends heavily towards men, and local office workers.

Inside, it's a modestly carpeted single room with the bar at the back and the front door dividing it into two sections. It stretches around to accommodate a booth overlooking the street corner on one side, up a few stairs, with several tables. On the other side of the room, standing drinkers have a place to rest their ales thanks to a rather odd little wooden partition stretching out from the corner into the middle of the space.

They have four handpulls at the bar, with Courage Best Bitter on two and Adnam's Bitter on the other two, well-kept and not too pricy for the area. The same beers were available on visits in March and October 2009.

Sports including horse racing is shown on several large screens, though these are generally turned down unless a major fixture is being shown.

Accessibility: No steps to get in, but gents toilets are down about five steps, and ladies upstairs.