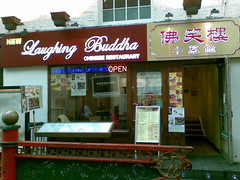 New Laughing Buddha was a Chinese restaurant in Chinatown. It closed some time in 2010.

As of July 2010 the site was occupied by a Vietnamese restaurant called Cẩm Phát photo, which then closed in its turn. Posters for a Hong Kong style place called Café de Chine photo went up in May 2011, but as of July 2011 this had been replaced by Manchurian Legends, another in the Leong's Legends stable (although a month later, "Café de Chine" still appeared on the Manchurian Legends debit card slips). In mid-2012, Manchurian Legends moved to Lisle Street and a Cantonese barbecue restaurant opened up in the Macclesfield Street premises. However, this didn't last long either. In September 2012, Limster reported on Chowhound that there was yet another new occupant, River Melody, specialising in Jiangsu cuisine, and in March 2013 Mr Noodles noted that this had given way to Maotai Kitchen.

The information below is retained for people who want to know what it used to be like as New Laughing Buddha.

Chinese restaurant in Chinatown, located on Macclesfield Street just south of Shaftesbury Avenue. It's right next door to De Hems, and indeed this is probably its main advantage; other than that, it's just a standard Chinatown restaurant which does the job but is certainly nothing special.

Kake, Bob, Nick, Leon, and Richard visited on a Monday evening in January 2008. No trouble getting a table; the place was almost empty. Our waiter seemed rather confused, returning to the table multiple times to check our order.

The menu is very long, covering all the usual dishes; there's also a section of chef's specials which includes some more interesting dishes. We started with mixed hors d'oeuvres (I think this was around £3.50/head); lowlights of this were the rather tough and dry chicken on skewers and the overly sweet sauce on the spare ribs. Main courses were somewhat better; the cuttlefish and jellyfish dish had nice chunks of garlic in, and the frogs' legs were tender with crisp, freshly fried batter. Pork belly and preserved vegetable hotpot had a decent quantity of both pork and preserved vegetable but was let down by its undistinguished and rather gloopy sauce and its lack of resemblance to an actual hotpot. Mussels were a bit chewy.

They also offer an all-you-can-eat menu, which I think is around £13/head; the way it works is that you can order as much as you like, as many times as you like, from a limited menu.

Fairly small seating area downstairs, more tables upstairs. The staircase is quite narrow. Ladies' toilet is upstairs (not sure if there's also one downstairs); gents' is downstairs. The upstairs ladies' is a single cubicle which was not very clean on our visit (thick layers of dust on all horizontal surfaces).

Kake's verdict: Probably won't bother coming back here; there are plenty of other choices in the area.