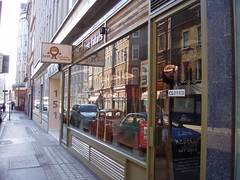 Munch was a falafel-based food shop in Soho. It closed in December 2009.

A falafel-based food shop in Soho, which used to be known as Just Falafs. There's another branch in Covent Garden piazza.

The speciality of the house here are the wraps, which despite the shop's name, can also include meat fillings. They offer a range of wraps (mostly vegetarian, but also lamb and chicken), which are made while you wait, and then lightly toasted, all for the price of £5 (£1 more for a large version). There's also a pre-rolled wrap of the day for £4. A list of extra seasonings (garlic, chilli sauce, et al.) are offered for no extra cost.

Soups and salad boxes are also offered on the menu, as well as organic fair trade drinks.

The cafe has a few tables for eating in, all chunky and wooden with benches, though diners near the counter may have to cope with takeaway customers pressing up against them. The prices are also slightly more expensive for eating-in.

On the whole this is a good value, tasty cafe in this busy area of town.