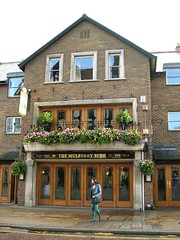 Young's pub on the South Bank, opposite the ITV studios and just along the road from BFI Southbank.

It has two floors, with the upstairs apparently being reserved for diners. There is a nice conservatory at the back of the ground floor. There's also a raised seating area opposite the bar with a few tables, which gets less busy than the front of the pub (where new arrivals tend to congregate). The decor is clean and modern. Sections of the pub can be booked for no charge, including both the conservatory and the raised area opposite the bar.

When bob and Martin visited on a Thursday evening in May 2007 the place was quite busy in general, though the number of people waxed and waned over the evening, probably due to the timing of performances in the surrounding venues. It's worth noting that even when the front was standing room only (and on occasions barely even that), there was always a lot more space towards the back and in the conservatory (even to the extent that there would be people standing at the front when there were free tables and seats in the conservatory). On a sunny Saturday visit by Ewan in August 2008, again the front was more crowded than the rear, where tables were available.

When Northern Steve and Amy visited in April 2018, the ales available were Young's Ordinary and Special, Twickenham Naked Ladies, and Hammerton N1. Although on a visit a decade previously (May 2007) bob had judged the ale quality as "tasty", on this occasion Northern Steve was unimpressed by the N1, as it didn't seem well kept. Other ales we've seen here in the past include Young's Waggledance, Bombardier, and Deuchars IPA, as well as Staropramen and Peroni lagers.

On a May 2007 visit, bob's steak (£10.75) was a touch tough and slightly overcooked, though Martin had no complaints about his burger (£8.25). (See also photo of the menu as of May 2008.) On a March 2010 visit, Ewan had a venison burger (around £9), which was acceptable if nothing particularly special, and served with some decent chips.

When Northern Steve and Amy visited in April 2018, the food seemed substantially more expensive than previously, with the burger now £13.50 and the steak £24. Despite plans to eat here, we decided to move on and eat elsewhere.

Service on all our visits has been efficient and friendly, despite the pub being very busy on occasion.

Accessibility: The main toilets are down in the basement, but there's an accessible toilet on the ground floor as well.