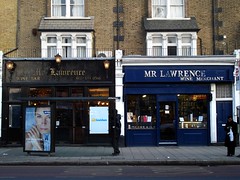 Mr Lawrence was a wine bar and wine/beer shop in Brockley, near Crofton Park Station. For various reasons, the shop closed on 26 January 2013, with sales continuing online only. The wine bar remained open for a few years, though in early 2014 it moved into the space previously occupied by the shop, and in May 2018 it closed down completely.

The beer shop is truly excellent. A huge range of interesting bottled beers, both British and Belgian, and the stock is changing all the time. They also sell real cider from a small producer. Kake visited in February 2008 and met one of the proprietors, a very knowledgeable and helpful lady who took me through a good proportion of the stock giving me background on the different breweries and producers. I bought as much beer as I could carry and plan to return for more.

The wine section at the back is just as impressive in its range, and is organised by country. They have a particularly extensive selection of wines from Chateau Musar in Lebanon (with vintages going back into the 80s, at increasing prices, obviously). On Ewan's February 2008 visit, the proprietor was very friendly and eager to show off his wines, which he notes are sourced from smaller producers. The shop itself imports a number of the wines it sells. Apart from good stocks of new world wines, and the major producers (France, Spain, Italy), there is also a good range of German and Austrian wines. There are even a few English wines (the Chapel Down wines, as well as Nyetimber sparkling).

Aside from the wines, the shop also has a good range of spirits available behind the counter. Again, the focus is on smaller independent producers, with a particularly fine range of cognacs (Maxime Trijol is the favoured label) and armagnacs, including some more expensive vintages. The proprietor was keen to mention his range of ports, which I didn't get a chance to look at.