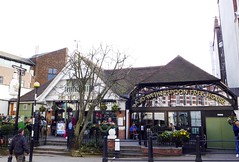 Wetherspoons pub in Muswell Hill, in the Good Beer Guide.

Entry is into a large, light, bright, bare-boarded area with a double-height ceiling surmounted by a large skylight. It really doesn't feel all that much like a Wetherspoons. The bar runs along one side, and booth seating with stained-glass separators faces it across the other side of the room. In the middle are high stools and tables, some of them made from reclaimed factory machinery. A mezzanine floor overlooks this, and there's yet more seating to the rear.

Right at the back, a conservatory-style area leads out to a stone-flagged patio with steps down to a sunken garden with a fountain, large model cow, and bar made from a milk float photo. Some of the seating in this part is covered, including a few booths. Up some more steps from here is an astroturfed "wood" area with silver birches and ivy.

Kake visited on a Tuesday afternoon in September 2017. There were a fair few people in when I arrived a little before 2pm, but there was still plenty of choice of seats. No music was playing, as is usual for Wetherspoons, but there was a pleasant buzz of conversation.

Accessibility: Step-free to get in via a wheelchair lift, though the entrance door is quite heavy. Another wheelchair lift to the seating further back, and there's a RADAR-locked Changing Places (accessible-plus) toilet on this level too. Other toilets are up a flight of stairs with a sturdy handrail. There are more heavy doors to the top part of the garden, and there's no obvious step-free route to the lower parts of the garden.