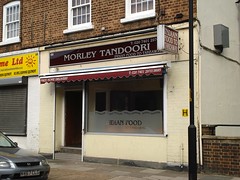 Inexpensive Indian takeaway near Waterloo Station. They also do delivery, and this usually arrives pretty quickly. You can order online from Hungry House or from Just Eat.

Their veggie thali is actually about enough food for two people (possibly with an extra side-dish if you're hungry). They do several veggie dishes, and they don't use ghee, so these are mostly suitable for vegans.

Kake has been less impressed; the veg dishes often manage to be both watery and oily at the same time, and the flavours of the spices are very indistinct. Having said that, the salmon rogon I tried in August 2007 was a lot better than I'd thought it would be; the salmon was cooked just right.

secretlondon had the meat thali which was uninteresting. It's definitely British Indian rather than 'desi' Indian food.