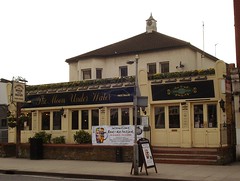 It's a fairly standard Wetherspoons, not overly large. An area at the front gets a decent amount of natural light photo. There are a couple of low sofas opposite the bar.

Kake, Shuri, and Robbie visited on a Wednesday evening in January 2012. The place was fairly busy when we arrived around 6pm, but we managed to nab the sofas. The atmosphere wasn't unpleasant, and Kake even had a small conversation with a random CAMRA member at the bar. There were a reasonable selection of real ales, and a pint of W J King Brighton Blonde was £1.99.

Accessibility: A ramp to get in. Step-free to toilets including a RADAR-locked accessible one.