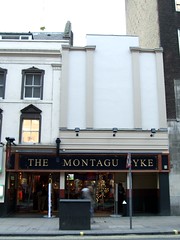 Known in the past as the Moon Under Water, and having also spent some time under Wetherspoons' Lloyd's No. 1 brand, this is now a fairly standard Wetherspoons. The building is of some interest, having once been a cinema (known variously as The Cambridge Circus Cinematograph Theatre, the Jacey, and the Tatler). The seating is on different levels, including a mezzanine floor high above the bar. There's no natural light, and the lighting is kept dim. Large flatscreens adorn the walls.

Kake and friends visited on a Monday evening in March 2010. Three real ales were available, all Greene King brands — Westgate Flankers Tackle (£2.40/pint), Abbot Ale, and Ruddles — plus Marcle Hill cider. Flatscreens were showing sport or something with the sound off. No music was playing. There were plenty of other customers during our visit (around 5:30pm-8pm), but there were at least one or two free tables throughout.

Accessibility: Half a dozen steps down (with handrail) to get in at the Charing Cross Road entrance, steps between the various seating areas, and the regular toilets are up a flight of stairs past the mezzanine. There's a lift at the Charing Cross Road entrance to get you down to the bar level, and there's an accessible toilet on the same level as the bar but you have to ask the bar staff for the key. Not sure if there's any normal seating on the bar level though — it might all be on high stools.