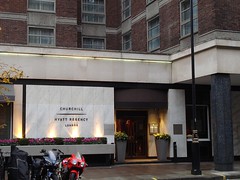 The Montagu is one of the restaurants located in the Churchill Hyatt Regency Hotel on Portman Square, near Marble Arch. It describes itself as British seasonal comfort food, and this would be a reasonable summary. The decor of the entrance hallway is wood panelling and marble for the most part, but when you get into the dining room it's more a black and white modern style. The style is not oppressive, and the atmosphere is relaxed and not too loud with no piped background music. There is a bar at one end and an open kitchen at the other end where you can see your food being flambeed and sauteed. You can sit at a special bar and spectate on the kitchen over dinner if you so desire.

Robbie and Shuri visited with some friends on a Saturday evening in December. We started with some cocktails as an aperitif. Prices ranged from £7 for a Kir Vin Blanc up to £12 for a Kir Royal or a Mimosa. Robbie had a Ruby Sour, apparently created by the hotel's barman, which was very tasty at £9.50 though I can't remember what was in it. Non-alcoholic beverages included iced tea, the restaurant's own lemonade and a range of fruit juices and canned fizz. The iced tea was unsweetened and came with a small jug of sugar syrup so you could sweeten it to taste. The lemonade was excellent - cold, very lemony and very sour. Staff were happy to provide sugar syrup to go with this on request too. They also didn't bat an eyelid when mewed at for taking the lemonade away a couple of sips prematurely. The bread that came to the table first was hot and crisp, and very good.

There is a choice of a set menu or a la carte. The former will set you back about £30 for three courses, and a bit less for two. Options on the set menu when we were there included a swede soup with thyme foam for a starter, beef daube for a main and a mousse as a dessert. There were other options, but I can't remember what they were. The a la carte menu was a varied selection for most people, though less so for vegetarians (it was slightly different to the one posted on their website, but only in a few items).

Robbie had a prawn cocktail to start, and it was everything you would expect a prawn cocktail to be. Nothing pretentious, just a good helping of plump, juicy prawns on top of crisp, lightly lemoned shredded lettuce and a sensible dollop of marie rose sauce on top. It was £12.50, but it was the essence of what this 1980s staple ought to be. The Loch Fyne mussels were a generous helping, served with sun-dried tomatoes and white wine for £9.50. The broth was too salty to drink on its own, but complemented the mussels excellently. A ham hock terrine with piccalilli was also well-received though I didn't try it myself. Vegetarians could avail themselves of a pumpkin, celery and apple soup, the Montagu salad, goat's cheese and red onion tart, poached pear and stilton salad or spinach dumpling with girolles though nobody in our party tried any of these. 30g of Caviar is£49.50 if you're feeling silly.

There was a suitable tasty range of main courses too, though not so much for vegetarians who are limited to the single veggie dish of the day. I forgot to ask what it was, but it costs £15.50. Robbie had the sirloin steak with herb butter and chips for £22.50. It was not huge, and there were only nine chips but the steak was cooked to absolute perfection. A hint of charred tastiness on the outside and perfectly pink and juicy on the inside. A little jug of very nice gravy was provided too. The chips were excellent despite their small number. A whole roast (smallish) lobster was £28.50 and was also very nice. Other options included veal fillet for £23.50, grilled dover sole for £27.50 and a grill of the day for £19.50. The beef daube from the set menu looked very well cooked - melt-in-the-mouth tender and generously proportioned. A selection of side dishes are available for £3.50, and the vegetables were perfectly cooked. French beans were a particular highlight, being cooked very simply but exactly right.

Desserts were £6.50 including a sticky toffee pudding, cranberry trifle and a white chocolate and praline parfait. The cranberry trifle was lovely, with juicy unsweetened cranberries complemented by whipped cream, sweet custard and some jelly and sponge cake. It also came with a sculptural wafer and sugar-syrup filament arrangement surmounted by a single lone cranberry on top.

Coffees and teas range from around ££3.50 to £5.50 including pretty flowering teas and a selection of posh green, white and black tea options. The coffee was good and was a perfect end to a very good meal.

The service was excellent. It was relaxed yet attentive without being overbearing. Everything happened right on schedule, with a suitable interval for digestion between courses. Chairs were comfortable, and though it was dark, I expect the view over Portman Square would be quite nice. The toilets were very good as one would expect (both ladies and gents).

Overall, the website reckons dinner for one with modest wine consumption is about £45. I'd be tempted to add at least £10-15 to that figure for a realistic number including coffee and a cocktail to start. They also do breakfast and afternoon tea - prices and menus are available from the website.