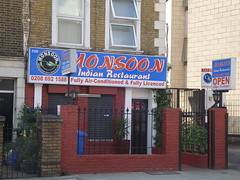 Monsoon was a small Indian restaurant on New Cross Road. It has now closed but may have moved to SE9 as its website has that location. As of mid-2015 the presmises are occupied by a restaurant and shisha bar called Karri Twist.

A small Indian restaurant on New Cross Road, which does takeaways, deliveries and online ordering via Just Eat and via Hungry House.

Ewan and Sajini visited in March 2008 to get a takeaway (which we brought back to the pub) and the food was acceptable. There were a few vegetarian options, but not too many. The dal was quite runny, but the naan was fine and the other main we had was quite tasty, if greasy.

secretlondon ordered a delivery via Just Eat on a weekday in October 2009. The food arrived 25 minutes late — and cold — after the driver had phoned up four times trying to find me, since he'd decided not to bring a map even though he'd never been to this part of London before. I had a vegetable thali (£8.75), narkel rami (beans & coconut; £2.60) and prawn puri (£2.75). The nerkel rami turned out to be green beans covered in a sweet coconut dressing, and the rest of the food was uninteresting.

secretlondon's verdict: I won't be ordering from them again.