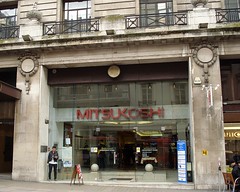 Mitsukoshi was a Japanese department store and restaurant on Lower Regent Street, just south of Piccadilly Circus. It closed in 2013 due to redevelopment of the building into St James's Market.

Sushi restaurant on Lower Regent Street, just south of Piccadilly Circus. It's actually in the basement of a department store, but don't let that put you off.

The sushi is very good; it's not cheap, though. Sit at the sushi bar for the best experience; the sushi chef will let you know what's good that day, and help you decide what to try if you're not sure. They also do shabu-shabu (Japanese hotpot).