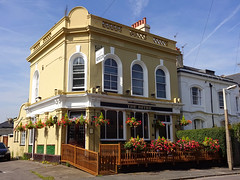 Pub in North Sheen, in the Good Beer Guide.

Inside, it's a single small room wrapped around a square central bar with gantry above. Fourteen handpumps are installed on the bar itself. Around the pub are various items of paraphernalia including an old-fashioned clocking-in machine, a globe of the world, and a robot stormtrooper helmet photo. Vintage posters hang on the walls, bare boards are underfoot, and there's some rather nice stained glass in the front windows photo.

There's some outside seating at the front, and in addition out the back is a patio-style beer garden photo with picnic benches and a covered nook with padded seating.

There were about half a dozen other customers in and out while we were there, many seeming regulars. Music was playing, not too loud, and a decent selection ranging from the late '50s to early '80s. Service was friendly, welcoming, and helpful.

They don't do food themselves, but they have an arrangement with a local pizza delivery place, Basilico. You can order and pay for pizzas at the bar, they'll phone up and order, and when the pizzas arrive they put them on plates and slice them up for you.

In August 2017, Kake and bob tried the Pizza Sicilian photo and the Pizza Diavola photo. Aside from bob's pizza coming with cheese despite having been ordered with no cheese, they were fine, with decently thin bases and good-quality toppings.

According to a poster seen in August 2017, there's live jazz 6pm-8pm every Sunday.

Kake's verdict: I liked it here and would happily come back.

Accessibility: A ramp to get in. No steps to toilets, but the floor is slightly uneven and the cubicles in the ladies' are a bit of a squeeze. Two steps (without handrail) to the beer garden at the back.